Below are the reviews of my debut album Sting Operation which was released on Out In The West Records and distributed by Genepool/ Universal. Sting Operation is a collection of songs I made with various artists whilst living in London. In 2008 it was distributed via Groove Attack in Germany, Switzerland and Austria. If you like a physical copy please order it via Bandcamp here: Sting Operation CD

“Recently arrived on these shores after a childhood in Paris and a sojourn in the Berlin underground, Beezwax has wasted no time hooking-up with some of London’s most respected road rhymesmiths for a stark and impressive debut.

Documenting the daily “struggle with Leviathan” and examining the alternative interpretations of the term “strapped for cash” are such luminaries as Yungun, Genesis Elijah, Stylah, Suparnovar, Mr Ti2bs and The Extremists, not to mention all three members of the fearsome Terra Firma infantry. It’s not hard to see how Beezwax garnered support of such calibre: he has a canny ear for a melancholy string or piano riff, and isn’t afraid to flip an original and inventive Middle-Eastern sample over a grimy beat or two if occasion demands.

Indeed, his production nous sometimes outshines the lyrical delivery of some of his collaborators, and retains the attention when the somewhat depressive, albeit worthy, tales of sufferation in the estates show signs of lacking thematic variety. When it works, though, it really goes for the cardiac: the string-laden refix of Klashnekoff’s ‘All I Got’ is nothing short of masterful, and ‘Everything Or Nuttin’ blends some great Persian stylings with Genesis Elijah’s stream of urban consciousness.” (E.H)

“Taste of honey. Producer-led sets are increasingly becoming ten a penny – with the inevitable decline in quality control that entails – so it’s good to find Beezwax bucking the trend. The veteran of hip-hop scenes in Paris, Berlin and now London packs a certain continental savoir-faire that’s not easily bottled. Over a broad base of bubbling backdrops he elicits some great vocals from the likes of Klashnekoff, Mr Ti2bs, The Extremists and a career high from the still underrated Genesis Elijah that’s the honeycomb centre on a debut bursting with natural goodness.” (Barry Sugarman)

“Producer Beezwax has spent time in both Paris and Berlin and, though now living in London, his sound is often (though not always) a world away from the minimalist Primo copies that sometimes characterises the UK scene. Full and melodic, it can switch from the jazzy piano of Heaven And Hell to the Eurhythmics sample of What’s Poppin’. The MCs are the usual roll call of London underground, with Klashnekoff, Mr Ti2bs and The Extremists being the most recognisable, though newcomer Kasha excels even while sounding very like Skinnyman. Sting Operation is a notably rich experience, with very little flab in its one hour running time.”

“Out In The West Records’ production Prodigy Beezwax has been influenced by French and German Hip Hop and Drum & Bass. He blends synth-based beds with organic, melancholy strings and piano motifs into original, wistful and often elegant sonic backdrops, for example ‘If I Ever Leave Feat The Extremists’, sick track. The LP features Klash, Skriblah, Ti2bs, Kyza, Yungun, SuparNovar to name a few. With the line up above and seriously original beats this is a sick LP, check it ASAP, especially Klash’s ‘All I Got Refix’.”

Below are some reviews from JUICE (German HipHop Mag), Touch, Hip Hop Connection & Blues & Soul for Sting Operation and the singles from the album “Dead Stranger/ What’s Poppin’/ Westmen” and “On Guard/ Black Clouds” 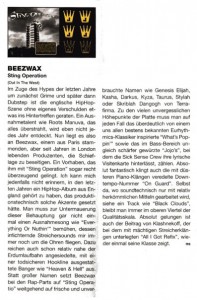 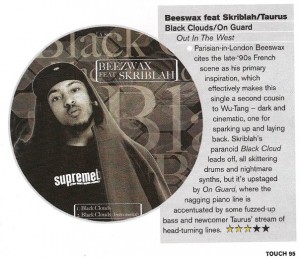 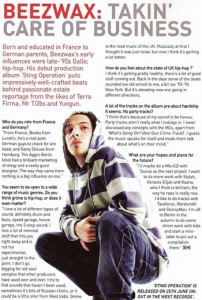